Text
Dr. Naohisa Takagaki, Graduate School of Engineering, University of Hyogo; Dr. Naoya Suzuki, Department of Mechanical Engineering, Kindai University; and Dr. Yuliya Troitskaya, Department of Geophysical Research, Institute of Applied Physics, Russian Academy of Sciences undertook joint research on the impact of surface currents in the ocean on the production of wind waves. Understanding the dynamics of wind wave production is essential for accurate modeling of momentum transfer in the atmosphere and ocean, one of the most critical factors in climate fluctuation and change.
The researchers used three different kinds of wind-wave tanks as ocean simulation equipment-located at Kindai University, Kyoto University, and the Russian Academy of Sciences respectively-to compare wind waves at wind speeds of 7 m/s-67 m/s in order to confirm that a Doppler shift occurs in wind waves not only at low wind speed but also for waves with intensive breaking at extremely high wind speeds.
The research results were published in the September 10, 2020 issue of Ocean Science, an academic journal of the European Geosciences Union.

Abstract
Waves on the ocean's surface include not only pure wind waves, but also ocean swells and surface currents (including ocean currents). Consequently, it is important to determine the impact of surface currents on the production of wind waves, especially since there have been few examples of research into the Doppler shift-i.e., the acceleration effects of the current on wind waves-when extremely high wind speeds are present.
For this research three different types of wind-wave tanks were used to demonstrate wind waves and currents at laboratories of Kindai University, Kyoto University, and the Institute of Applied Physics, Russian Academy of Sciences. The study investigated 27 cases with wind waves being reproduced at wind speeds ranging from 7 m/s to 67 m/s in order to study the Doppler shift, one of the factors affecting surface currents. The results confirmed that the Doppler shift is produced not just with low wind speeds but also at extremely high winds when the surface is intensively broken by high wind shear. Furthermore, it was learned that since the Doppler shift accelerates wind wave velocity, the phase velocity can be represented as the sum of the speed of surface current and theoretically calculated (estimated) phase velocity.

Introduction
In recent years, global warming has been causing serious problems, including a rise in sea level, desertification, and abnormal weather. That is especially true of rapidly increasing damage from typhoons, hurricanes, "bomb cyclone" low-pressure systems, and other abnormal weather conditions.
In order to take effective measures to deal with such destruction, accurate forecasting of climate change attributable to global warming is critical. For that reason, it is important to be able to accurately determine turbulent transfer (momentum, heat, material) in the atmosphere and within the ocean, which is one of the basic elements determining fluctuation and change in weather systems.
Among these, the momentum in the atmosphere and ocean in particular is a major source of energy for wind waves and ocean currents. It also leads to furthering heat and material transport in the atmosphere and ocean. For that reason, atmospheric and oceanic momentum transfer is important.
In general, atmospheric and oceanic momentum flux is empirically determined. However, the coefficient used with this method only provides the exponential function for wind velocity for the sake of convenience and does not take into consideration the impact of boundary processes on the sea surface, including various phenomenon of varying scale, such as wind waves, breaking waves, and air bubble formation.
For that reason, the coefficient values for wind velocity fluctuate considerably and up until now no model yielding accurate values had been established.
With open measurements it is very difficult to achieve accurate measurements of the ocean surface in terms of various sampled phenomena, such as current velocity, temperature, or concentration, with measurement devices limited to established locations since the sea surface is an unsteady, complex environment in which wind and waves exhibit constant change.
Furthermore, it is extremely difficult to carry out measurements in typhoons, hurricanes, and other strong wind zones. Therefore, researchers used wind-wave (turbulence-generating) water tanks, which are ocean condition simulation devices that make possible accurate measurements of turbulence for stationary wind wave turbulence fields with a broad range of wind speeds from low to extremely high. Such experiments are important for understanding in detail the mechanisms behind atmospheric and oceanic momentum transfer through accurate measurements of current speed, temperature, concentration, etc. 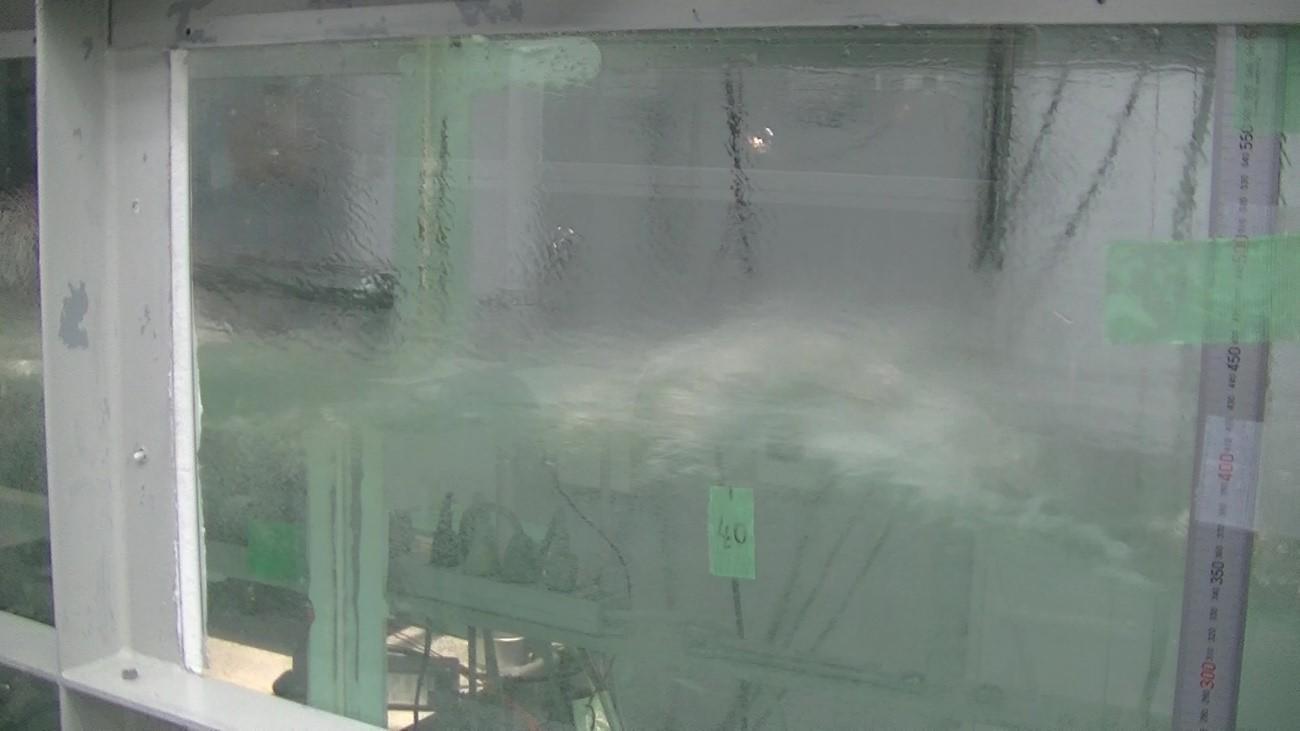